Myths about HIV and AIDS

•    unprotected sex
•    from mother to child during pregnancy, childbirth or breastfeeding
•    injecting drugs with a needle that has infected blood in it
•    infected blood donations or organ transplants
•    A healthcare worker who gets the blood of an infected patient inside their body.

You cannot get HIV from…

2. Insects
You cannot get HIV from insects. When an insect (such as a mosquito) bites you it sucks your blood – it does not inject the blood of the last person it bit.

5. Water
HIV can’t survive in water, so you won’t get HIV from swimming pools, baths, and shower areas or from drinking water.

6. Toilet seats, tables, door handles, cutlery, sharing towels
HIV doesn’t survive on surfaces, so you can’t get HIV from any of these.

8. Used condoms (NOT FOR RE-USE FOR SEX)
HIV can only survive for a really short amount of time outside of the body. Even if the condom had sperm from an HIV-positive person in it, the HIV would be dead. So it will be safe if you accidentally touched one.

9. Kissing
There is such a small amount of HIV in the saliva of an infected person that HIV can’t be passed on from kissing. There is only a risk if you both have large open sores or bleeding gums and blood is exchanged.

Condoms- How to use a Male Condom 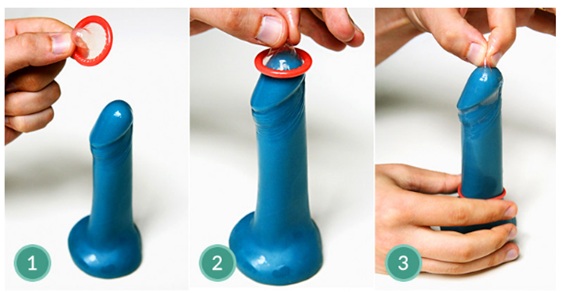 By practising safer sex, you can protect yourself from an unplanned pregnancy and sexually transmitted infections (STIs), including HIV. This means always wearing a condom, but first it’s a good idea to know how to use one.

You should use a condom during any sexual activity where you may be at risk of sharing bodily fluids.

How do I use a condom?
•    Check that the condoms are in date (not expired), in good condition (the pack is not punctured – has a balloon fill).

•    Open the packet carefully so that there’s less chance of ripping it. There’s usually an arrow on the packet to guide you in the direction you should open it. Avoid using your teeth and be careful with sharp fingernails or jewellery.

•    Condoms come rolled up and need to be placed on top of an erect penis.

•    Pinch the teat at the end of the condom before you start to roll it down the penis. By doing this you will be helping to squeeze any air bubbles out and this will prevent friction that can cause condoms to break. It will also help you know if the condom is on the right way.

•    Roll the condom down to the base of the penis. If it’s on correctly it will roll downwards easily (or you may be able to feel the texture of the outside of the condom if it’s ribbed). If you’re not sure then use a new condom and try again. This is important even if the man hasn’t ejaculated because there can still be sperm on the penis (pre-cum).

•    Only take the condom off when the penis is withdrawn completely from the body and while the penis is still erect. Tie a knot in the end of the condom, wrap it up, and throw it away in a bin (don’t put it down the toilet as it can block up your plumbing).

•    Always use a new condom if you have sex again.

Remember: Avoid using two condoms at once or a female condom at the same time – this can cause friction and they’re more likely to split or slip off.

The spread of HIV (called HIV transmission) is only possible if these fluids come in contact with a mucous membrane or damaged tissue or are directly injected into the bloodstream (from a needle or syringe). Mucous membranes are found inside the rectum, the vagina, the opening of the penis, and the mouth.

HIV is spread mainly by having sex or sharing injection drug equipment (“works”), such as needles, with someone who has HIV.

HIV can also spread from an HIV-infected woman to her child during pregnancy, childbirth or breastfeeding. This spread of HIV is called mother-to-child transmission of HIV.

HIV can also be acquired by receiving a blood transfusion or organ/tissue transplant from an HIV-infected donor.

How can I reduce my risk of getting HIV?
Anyone can get HIV, but you can take steps to protect yourself from HIV infection.

Are HIV medicines used in other situations to prevent HIV infection?

PEP is the use of HIV medicines to reduce the risk of HIV infection soon after a possible exposure to HIV. PEP may be used, for example, after a person has sex without a condom with a person who is infected with HIV or after a health care worker is accidentally exposed to HIV in the workplace. To be effective, PEP must be started within 3 days after the possible exposure to HIV. PEP involves taking HIV medicines each day for 28 days

Prevention of mother-to-child transmission of HIV

Pregnant HIV-infected women take HIV medicines during pregnancy and childbirth to reduce the risk of passing HIV to their babies. Their newborn babies also receive HIV medicine for 6 weeks after birth. The HIV medicine reduces the risk of infection from any HIV that may have entered a baby’s body during childbirth.